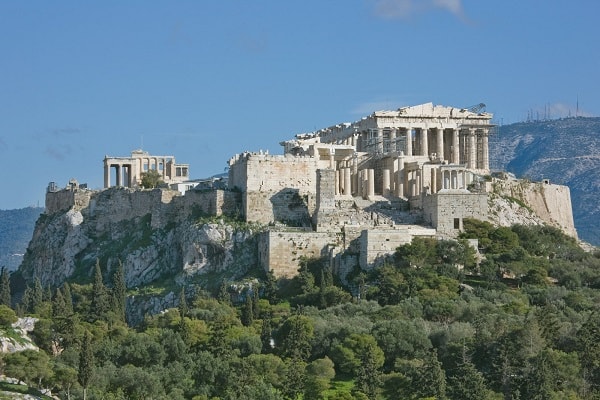 On the rocky hill of the Acropolis, which dominates the center of modern Athens, it was the most important and majestic sanctuary of the ancient city, dedicated mainly to its protector goddess Athena. This sacred site is associated with the most important myths of ancient Athens, the great religious feasts, the oldest cults of the city and some of the events that are decisive for its history. The monuments of the Acropolis, harmoniously combined with the natural environment, are unique masterpieces of ancient architecture that express pioneering correlations of rhythms and trends of classical art and have influenced the spiritual and artistic creation for many centuries later. The hill was chosen from the Neolithic years (4000 / 3500-3000 BC) as the site of the inhabitants of the area. Early and Middle Bronze Age was found in the Erechtheion. In the 13th century. BC, the rock was slashed and became the seat of the local ruler. Parts of this wall, commonly referred to as "cyclopean", are fragmented between the later monuments and its course can be restored with relative precision. In the 8th century.